To support the launch of an NPD, the NESCAFÉ® Dolce Gusto® coffee machine, we were briefed to develop a digital campaign to drive sales of the new machine.

Our task was to dramatise the benefit of getting together in the workplace and creating the right conditions to encourage people to do so, by targeting the gatekeeper in SME workplaces via digital, to drive awareness and sales of the new coffee machine.

Building on the insight that workplace teams comprise many different personalities, and we work best when we work together, where everyone brings something to the team. It’s also never been harder to get the team together,

The NESCAFÉ® Dolce Gusto® Majesto coffee machine offers over 30 varieties of hot drinks, meaning that there’s a drink type to suit every personality in the workplace.

When we bring these personalities together we work better together, in other words, ‘work works’ when we work together – supercharge your office get-togethers! 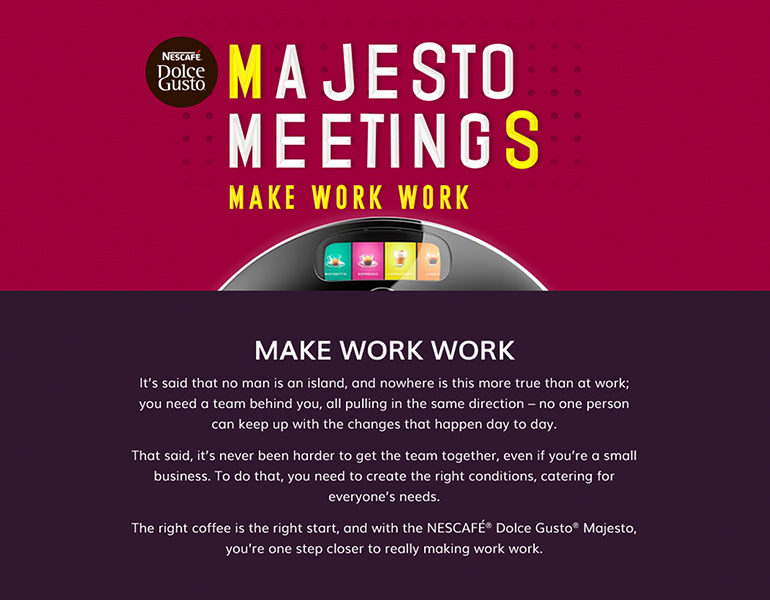 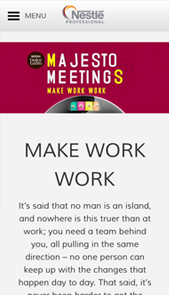 Creative idea
We campaign a creative platform of ‘Majesto Meetings’ bought the idea to life with four executions that parodied the last 6 seconds of a successful meeting.  There are fist bumps, high fives, a full range of over-the-top celebrations,. This idea brings energy and humour to the message, by exaggerating the benefit of the Majesto machine and coffee… and its impact on the workplace

Another successful meeting… brought to you by NESCAFÉ® Dolce Gusto® Majesto

Short form video
The films are delivered as ‘snackable content’ in the form of 6 second bumper ads for Youtube and Facebook, with a filming style reminiscent of ‘The Office’… documentary, simple fly-on-the-wall style.

Production
Carried out over a 2-day shoot, our content team shot and edited 5 short-form videos to run across social, YouTube and the website.  We cast 5 comedy actors to star to star in the films plus a comedy director, to get the right performances for the stories.

Amplification
Campaign awareness is driven via 6-second ads delivered on Facebook and YouTube targeting the gatekeeper in SME workplaces.  The adverts are delivered, with a sequential messaging approach so that consumers would see a different creative each time they were served the ad.

Following engagement with video, consumers are retargeted via display to drive consumers closer to purchase with a stronger buy now message.

The campaign launched in October 2018, and is still ongoing.