We were briefed to drive awareness and consideration of the Swizzels’ variety sweets range.

We needed to stand out in store and on shelf to drive impact and appeal with our target audience, and so we were asked to build an exciting platform that could become a centrepiece for a wider Swizzels campaign.

We know that for most kids (and adults!), a sweet factory is a magical and wondrous place, where young minds can only imagine what goes on inside… what might you see, what would you taste, what could you make?

By using this hook, we could create a wonderful and magical promotion, like something out of a story, creating a uniquely ownable property for us to create wider activities from!

With the team at Swizzels, we created a promotion that centred around a magnificent and exclusive tour of the Swizzels factory. There were only five of these amazing prizes to be won and all consumers had to do was find the Golden Love Hearts pack in their Swizzels promotional bag!

For anyone who wasn’t lucky enough to find a golden roll, there was a chance to win 1 of 10,000 Mr Swizzels cuddly toys. Consumers were asked to head to our microsite and enter their pack code for a chance to win, where wins were awarded via a randomised algorithm created by our Promotor platform.

The promotion was communicated directly on packs and advertised via in-store media, such as fully branded FSDUs. We also created a series of social animations to tease, launch and promote the promotion using a mix of real-life factory footage and playful animation. 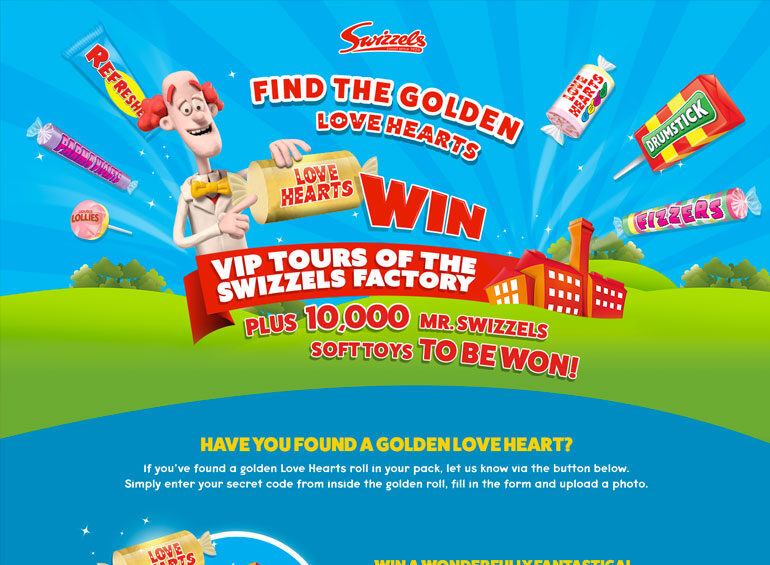 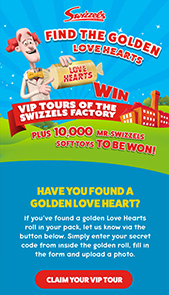 The promotion is still running and there are still golden rolls to be found, so keep your eyes peeled! The campaign ends in May 2022.