With the success of the 2020 Triple Chance campaign, we were tasked with coming back bigger and better in 2021… a bigger promotion and across more retailers! Our brief was to drive trial and the base rate of sale of Grant’s Triple Wood 70cl by adding value to the bottle purchase and reinforcing the usage occasion.

With sport being a key hook for our audience, and our sporting prizes working so well from the year before, we needed to create an activation that captured the low-key drink at home occasion and our audience’s passion for sport. With live sport slowly returning after Covid, this felt like a brilliant time to get people excited about seeing live sport back on screens.

Well recognised in the sporting world, we landed on a key message of ‘it’s coming home’ with Grant’s. Our on pack activation re-enforced Grant’s quality messaging of ‘triple’ by offering consumers three chances to win.

We gave consumers the chance to win everything they needed to create the stadium atmosphere at home with weekly home cinema kits and a top prize of the ultimate home cinema sports package, including a £1,000 living room makeover and 12 months SKY sports subscription. We also gave away daily Grant’s-branded whisky glasses which proved to be a big hit.

The promotion was in stores from April until July 2021, ran across six key retailers, and was communicated via on an pack neck hanger, as well as in online and offline retail media.

Another fantastic promotion for Grant’s, with great entry figures and feedback from customers. 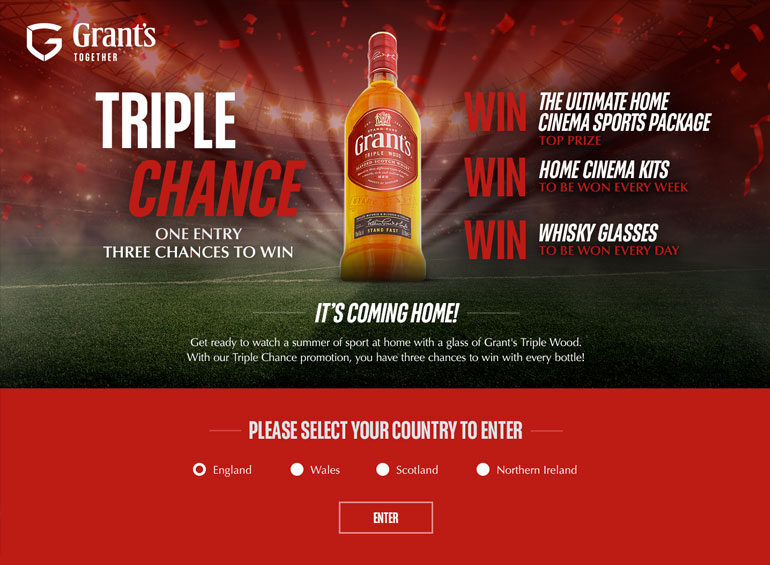 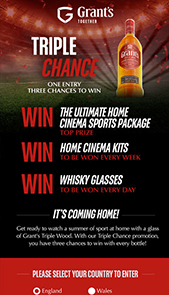